skip to main | skip to sidebar

I typed out a full blog post the other day, but it vanished into cyber space. This is just a test post, sans picture even.

In summary, my previous post: I reached WW goal weight (near the top of my healthy range), reached Lifetime after maintaining over Christmas (go me!) and now am attempting to keep at least a 10 pound padding (wrong word to use?) to keep WW Lifetime going!

I'm going to blog recipes and workouts here again. Cooking Light magazine is no more (boo!), but I'm doing a food delivery box: Good Food, which I can also review. YEAH! love it!

Hope to make this writing a regular thing as a motivation to a Healthier ME! Happy blustery Sunday, everyone!
Posted by JanetM97 at 9:36 AM No comments: 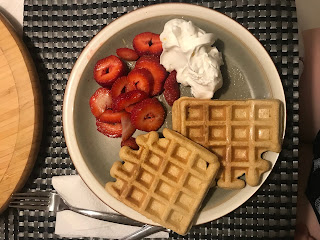 First week of summer vacation is almost over and I haven't posted in weeks! My goal is to post at least once a week this summer, especially if I test a new recipe. Tonight, after being inspired by Weight Watcher peeps using Kodiak waffle mixes, we drove to Buffalo, bought some and I made Lemon Strawberry Kodiak Power Cake Waffles from TwoPointsforHonesty's blog tonight.

They were soooo tasty! I'm excited to try other recipes using the mix. My daughter served up the non-fat cool whip a little heavy on our plates. It should be a tablespoon. I promise I didn't eat it all. Pictured is my husband's plate- my first attempt at the waffles. He DID eat all the Cool Whip, but he's not on WW.

Next time I'd use more of the lemon. I was rushing as we were eating late, so I just used the half lemon that I had in the fridge. The waffles just had a hint of lemon. I'd like a bit more and the recipe called for more. They smelled so good, too. TwoPoints blog has these as 3 point waffles. I didn't have non fat syrup, and used a tsp of maple syrup which is always in our fridge, eh? So that added a point. I added another for the extra Cool Whip that I did eat.

In weight loss news, I lost my 10 percent on my Weight Watcher's adventure that started in late April. I WAS down a couple pounds this morning, but with a Cheesecake Factory meal for lunch (though I did choose carefully), and this late night waffle eating,  we'll see if my weight bounces up a bit tomorrow morning at my official weigh in.

I also joined Boot Camp this week and survived my first session on Wednesday. I felt sore today, walking around searching for waffle mix, but am excited to see how I can improve my fitness and hopefully tone up!

Anyway, I look forward to more blog reading and blog sharing, as it will (usually) mean that I've tried something new. I need to keep my interest levels up for successful muffin crumbling..

Have a great weekend!
Posted by JanetM97 at 7:33 PM No comments:

One week in with a side of Grilling! 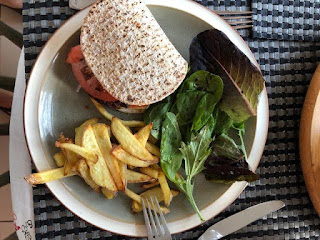 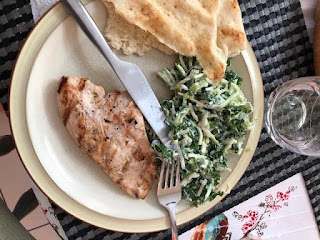 
One week in and I've been enjoying the new Weight Watcher's plan. I was down 4 pounds at weigh-in. Tonight's lamb burger (from our local butcher's) was a little high point-wise, but delicious. I HAD PLANNED on eating only half of it, but once I started, I couldn't stop. lol. The bun was a good WW find though at 3 points. I found the buns at Metro-they're called "Flatout Foldit 5 Grain and Flax." -really tasty and kind of cool in its wrap-arounded-ness.

The fries were fresh cut Yukon gold in my T-Fal ActiFry. They only take a bit of oil.

Also, pictured here, a BBQ chicken recipe that is a change from how I USUALLY do Rosemary-Lemon chicken- slightly more olive oil. I made a Cooking Light buttermilk dressing with the Kale slaw. I sacrificed points for the warmed Naan on the side. Delicious!

Here's hoping the warm weather continues. I missed walking today as my usual Tuesday workout partner had to babysit. Wishing everyone good weather and good food!

Back to Healthy Eating!

Just finished my first week back on Weight Watchers and first week back (in a long time) in being committed to healthy, but interesting meals. So... am recommitting to this blog. I have a stack of new cookbooks to test and a new WW program to get used to. Hope to find fellow bloggers for inspiration.

That is all for now! Have a nice rainy weekend!
Posted by JanetM97 at 7:48 AM No comments:

It's been awhile! I'm back to a focus on healthy eating- back to a desire to lose weight and so I thought I'd come back to The Crumbling Muffin Top to encourage myself to try some new recipes. Go me!

One of my new recipe books (a Homesense find) that I'm going to try a recipe from tonight is this one: 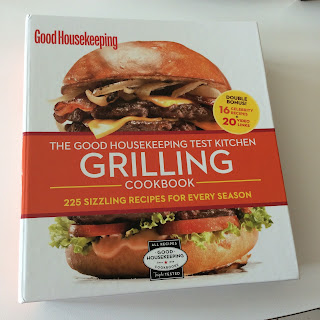 I love books with clear tabs- so easy for flipping through, and I love summer grilling, but I get stuck doing the same thing, so this should be good! 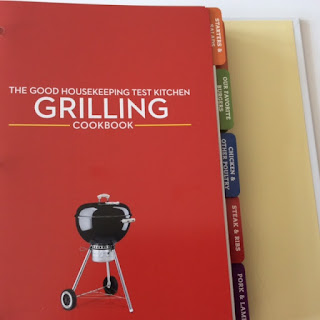 I am going to try to add more fish in our weekly diet, so the one I'm trying tonight is "Cedar-Planked Salmon with Quinoa Salad." I'll let you know how it goes. We do cedar-plank salmon pretty regularly in the summer, and I've posted a Cooking Light cedar-plank recipe here, but we haven't done Quinoa Salad as a family and my husband was recently complaining about the spice in the CL one. (He's picky, and I have to sometimes not listen to him or we'd never try anything, but maybe he'll like this one!) I was also drawn to this recipe (besides the cedar planks) because you soak the cedar plank in water and Sambuca! Interesting! We have a full bottle of Sambuca that we got as a gift ages ago.Score!

I'm also back to Weight Watchers. We just did an "At Work" program this year at my school, and while meetings are off for the summer, I'm going to keep going online.

The recipe works out to 10 Smart Points according to the nutritional guide, though that doesn't include the sugar stats, which aren't given in this book! I'm thinking that the grilled vegetables have sugar, but I'll leave it at 10 for now. (Not sure if there's still a recipe builder in the online program. I'll have to check it out.)

I notice that most of the blogs that I used to follow are inactive, so I hope to find some new ones to follow.

I have to start regular exercise again. My fitness has been sporadic!

okay, off to make some quinoa...

Is this thing still on?

It's been awhile, I know! Starting back posting soon. Just checking to see if everything is in working order. :)
Posted by JanetM97 at 9:44 AM No comments:

This is the way to stay on program for me: a week of tracking, of getting workouts in (mainly power walking) and trying new recipes. Why do I let myself slide so far off track when being on program feels so much better. *sigh* I'm basically starting all over again. No use crying over spilled milk, as they say. Anyway, I was down 5.4 pounds at weigh-in this morning. See tracking does work, Janet!

Anyway, let me share some of the recipes that I tried. I love the page of smoothie ideas in the September 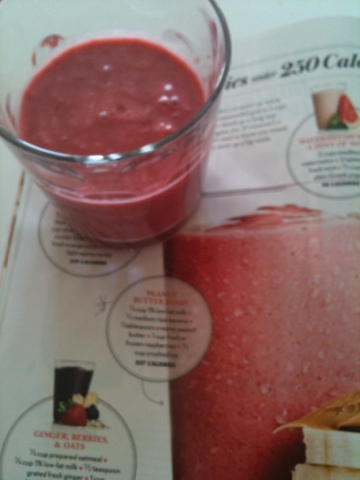 issue of Cooking Light (Peanut Butter Berry) and it was refreshing though a bit tart. (My smoothie drinking child added sweetener.) I used skim milk instead of their suggested 1%, since that is what we have in the fridge, I had raspberries which I picked up at Costco and had forgotten to serve (so yeah!), and using one of my many over ripe bananas (my family basically eats green ones), I was good to go on this one without an extra trip to the store.

I've actually never (in recent memory anyway) used pb in a smoothie, even though it's a staple in our house. Not sure why! Easy protein- which I probably don't always get enough of.

The other smoothie I made from the double page spread was the Creamy Mango, Avocado and Lime one. I did it in the middle of the morning rush before work, even. Didn't enjoy dealing with the mess involved while rushing to be on time, but the smoothie itself was very refreshing and kept me feeling satisfied until lunch. My mango was a little unripe- I'll have to do it again with a ripe one, I had an avocado already on hand (love those things) and our garden has been taken over by mint- so that made me really want to try this one. It was unlike any smoothie I've ever made, and very refreshing. It made me think of something that might be served at a fancy spa before your facial and mud bath. har. 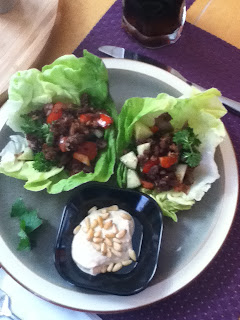 I also tried Crisp Lamb Lettuce Wraps from the August 2012 issue this week. I have to admit I didn't tell my family it was lamb. It was really tasty- loved the hint of cinnamon and with the lack of a bun, the two Boston leafy cups of lamb and veg was only four points. No one in my family would try the hummus/yogurt/pinenut sauce (why I served it on the side- since I know these people), but that was really good, too. I didn't go out and buy the suggested red pepper hummus, as my fridge is filled with other flavours of hummus and I'm trying to work on wasting less food (as well as losing weight), so I used the pinenut hummus we had in the fridge. 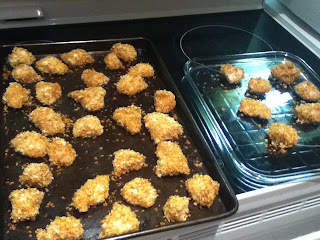 Another CL dish I tested on my family this week, which I didn't have to pretend was something else, was the recipe makeover recipe in the September issue:  Chicken Nuggets with Crispy Potato Chips and Honey Mustard. My kids really liked them, especially my 13 year old and both my children took leftovers ones (I had way more nuggets than the suggested serving size) for lunch the next day. The cool thing about this recipe is that you marinate the chicken in pickle juice and buttermilk before dipping it in panko. It gives the chicken a nice pickle flavour. I did try the chip recipe, but couldn't find the required purple sweet potato, used a regular sweet potato (I like the chips, but my kids didn't really.), as well as fries from our low-fat chip maker (which I knew everyone would like). The whole meal deal was definitely one I'd make again. Plus, I bought that really large bag of panko from Costco, so...you know, the whole not wasting food thing... ﻿
Posted by JanetM97 at 8:27 PM No comments: